These first drill holes extend toward south-east zones already identified in the tonalite. Note that the complete extension of drill hole #25, down to a depth of 349 metres, yielded a weighted average grade of 1.2 g/t Au over 160 metres.

Until now, twenty seven NQ drill holes have been completed, as well as the extension of drill holes #25 and 52, for a total of approximately 6,930 metres drilled, which is close to 70% of the Summer-Autumn 2016 drilling program. 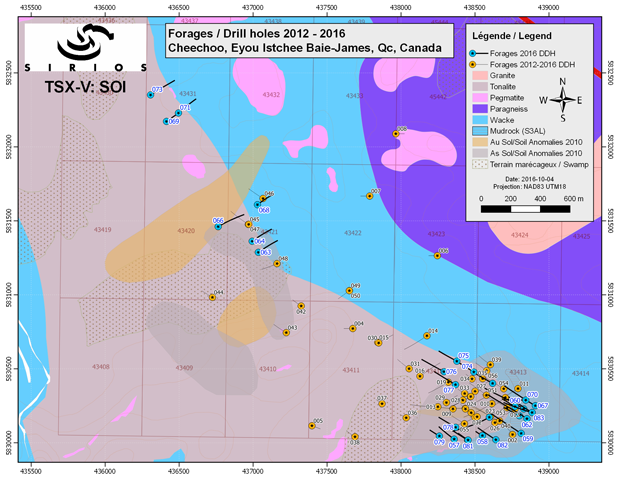 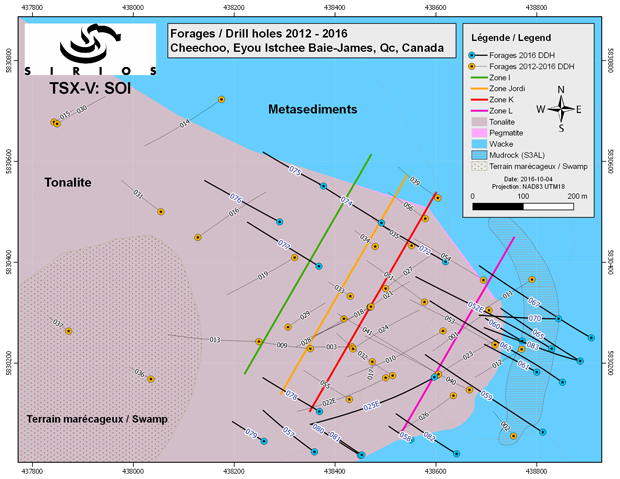 A pause in the drilling program is expected in order to allow the receipt of assay results from already completed holes to optimize the positioning of upcoming ones. Currently, samples of almost all completed drill holes have been sent to the laboratory for assay. The next series of results should be available and released at an interval of approximately two to three weeks.

A detailed geological mapping was undertaken on the area of rock unearthed by mechanical stripping completed in September. Almost 900 metres of channels have been sampled on the stripping site. Channels samples will be sent this week for analysis. Finally, the geological soil survey (humus) was completed recently, approximately 2,580 samples were collected and will be prepared for analysis in upcoming weeks.

Sirios’s fully owned Cheechoo property is located at Eeyou Istchee James Bay, Quebec, at 800 km north of Montreal and at less than 10 km of the Éléonore goldmine of the producer Goldcorp.

All NQ drill cores were described by personnel of Sirios at the Cheechoo exploration camp. They were then sent to Rouyn-Noranda to be sawed in half, with one half sent to a commercial laboratory for analysis and other half retained for future reference. A strict QA/QC program was followed by integrating blanks and standards to core samples, all of which were prepared by Services Technominex Inc. of Rouyn-Noranda. They were then assayed for gold by fire assay and atomic absorption finish by Actlabs in St-Germain-Boulé, close to Rouyn-Noranda. Samples grading more than 3 g/t were re-assayed by fire assay with gravimetric finish. Samples with visible gold were assayed by pyro-analysis with metallic sieve from a sample of about 1 kg.