Sirios Intersects 12.08 g/t Au over 20.3 metres by Drilling at Cheechoo

MONTREAL, QUEBEC–(Marketwired – March 29, 2016) – Management of Sirios (TSX VENTURE:SOI) is pleased to announce partial assay results of drill hole #52. Following observations of visible gold indicating potentially a significant gold zone in this drill hole, Sirios geologists extracted a series of drill core samples for priority assay. It shows, between 120 m and 140.3 m, a section grading 12.08 g/t Au over 20.3 metres including 48.38 g/t over 4.4 metres (uncut grades, true width unknown). The gold mineralization is distributed in both meta-sedimentary rocks and the tonalite, thus overlapping the contact of these two lithologies (figure 1). Gold is associated with the presence of numerous folded millimetric veinlets of quartz-feldspar. Only the section between 113.5 m and 147 m was assayed to date in this drill hole, results are detailed in the table below.

Dominique Doucet, President of Sirios, states: ”Drill hole #52 was aiming at zone L, a suspected auriferous structure intersected by drill holes #1, 12, 26. This drill hole confirms and accentuates the high-grade gold potential over good widths as much in meta-sedimentary rocks as in tonalite. It adds yet another significant target that will be tested in the upcoming drilling campaign.” 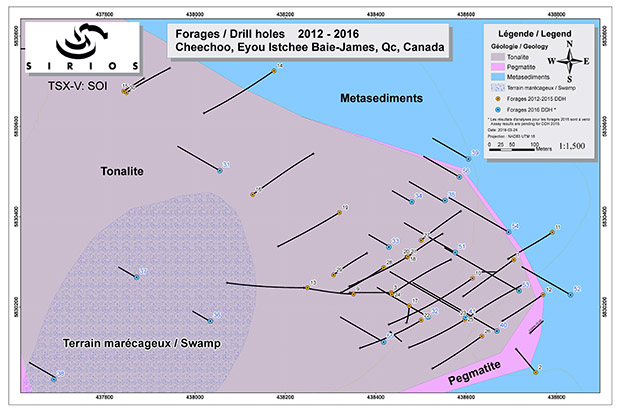 The CHEECHOO gold project is located in Eeyou Istchee James Bay, Quebec, 800 km north of Montreal and less than 10 km from the Eleonore gold mine of producer Goldcorp that has just begun production. This world-class deposit contained 4.03 million ounces of gold and 4.10 million ounces of inferred gold mineral resources (Source: Press release of Goldcorp, March 28 2014). In 2012, Sirios concluded an agreement with Golden Valley Ltd. regarding ownership of CHEECHOO allowing it, to upon completion of certain obligations and counterparts, increase its current interest to 100% (press release dated December 9, 2013). Sirios is the manager of the project.

NQ-caliber drill cores of current campaign were sawed in half, with one half sent to a commercial laboratory for analysis and other half retained for future reference. A strict QA/QC program was followed by integrating blanks and certified reference materials to the drill core samples, all of which were prepared by IOS Services Géoscientifiques inc. of Chicoutimi, and assayed for gold by fire assay and atomic absorption finish (AA24) by the ALS Minerals laboratories in Val d’Or, Quebec. Samples grading more than 3 g/t were re-assayed by fire assay with gravimetric finish. (GRA22). Samples with visible gold were assayed by pyro-analysis with metallic sieve (SCR24) from a sample of about 1 kg.

For the section from 113.5 m to 147.0 m of drill hole #52, twenty-seven samples, of approximately 1 kg each, representing 33.5 m of drill core, were assayed via rush priority for gold by fire assay with metallic sieve (SCR24) by ALS Minerals in Val-d’Or, Quebec.

This press release was prepared by Dominique Doucet, P. Eng., President of Sirios, Qualified Person pursuant to National Instrument 43-101. M. Doucet will be presenting the Cheechoo gold project at the John Tumazos Very Independent Research Metals & Natural Resources Conference at 5:05 pm (ET) on March 31, 2016. The conference will take place in New York, NY. Interested parties are invited to listen to the live webcast by visiting the following link:
http://wsw.com/webcast/vir15