The airborne survey which is expected to be carried out in mid-February will cover the entire property block with a 50-meter line spacing, totalling 2,394-line kilometres. This survey will provide Sirios’ exploration team with valuable geophysical information detailing the northeast-southwest trending shear zone identified last summer on the original claims of the “39” Property. This potentially favourable shear zone is interpreted to extend onto Sirios’ recently acquired mineral claims.

The Niska property, which is wholly owned by Sirios, is located about 30 kilometres northwest of the km 381 relay station on the James Bay road connecting Matagami to Radisson in Eeyou Istchee James Bay, Quebec. The property is composed of 189 mining claims, covering an area of 99 sq. km. It is located between the Munischiwan property, co-owned by Azimut Exploration and SOQUEM and the recent Patwon discovery on Azimut’s Elmer Gold Property, where drilling results yielded 3.15 g/t Au over 102.0 m, including 10.1 g/t Au over 20.5 m. (Azimut press release January 14, 2020) 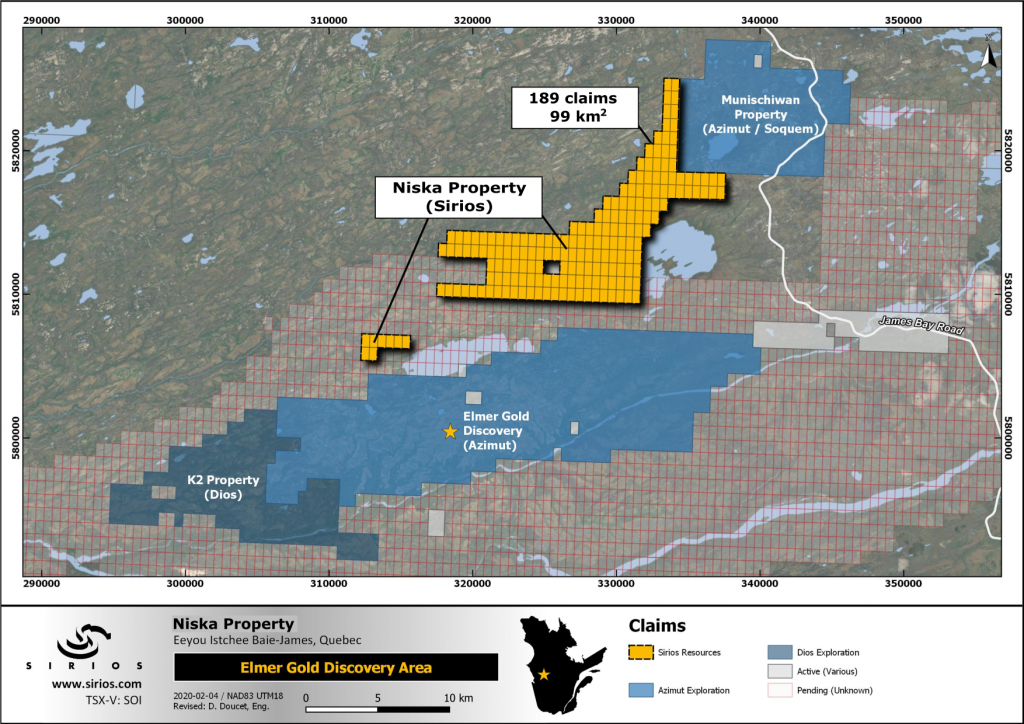 This press release has been reviewed and approved by Dominique Doucet, P.Eng. President and CEO of Sirios Resources Inc. “Qualified Person” as defined by National Instrument 43-101.

Founded in 1995, Sirios Resources develops and explores its own mining exploration projects. Pioneer in the discovery of significant gold deposits in the Eeyou Istchee James Bay region of Quebec, Canada, over the years, Sirios focuses mainly on its Cheechoo gold discovery while actively exploring the auriferous potential of the Eeyou Istchee James Bay area in Quebec.