SIRIOS intersects 315 g/t Au over 1.1 m on the Eclipse zone at Cheechoo

MONTREAL – Management of SIRIOS Resources Inc. (TSX-V: SOI) is pleased to announce results of the first six drill holes of the current drilling campaign on the Cheechoo gold property. Best results of the Eclipse zone include drill holes #199, 201, 202 and 204;

Five of six drill holes intersected the Eclipse high-grade gold zone at the expected depths, hence confirming its continuity. The zone forms an East-North-East trending plain, dipping at approximately 65 degrees to the North-West. It can be traced laterally over approximately 150 metres and down dip for more than 130 metres. Its true width ranges from 0.9 m to 3.0 m as shown on the longitudinal section. The Eclipse zone remains open along strike and at depth. Additional holes are being drilled to continue testing this zone.

Only drill hole #203 did not intersected the Eclipse zone. 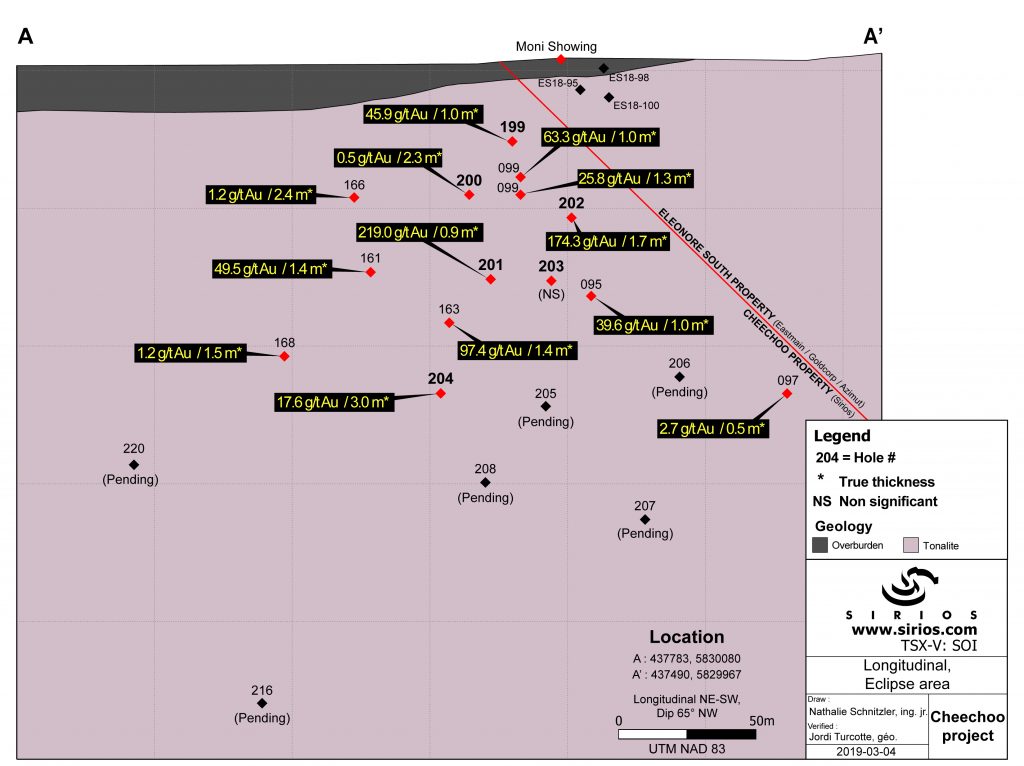 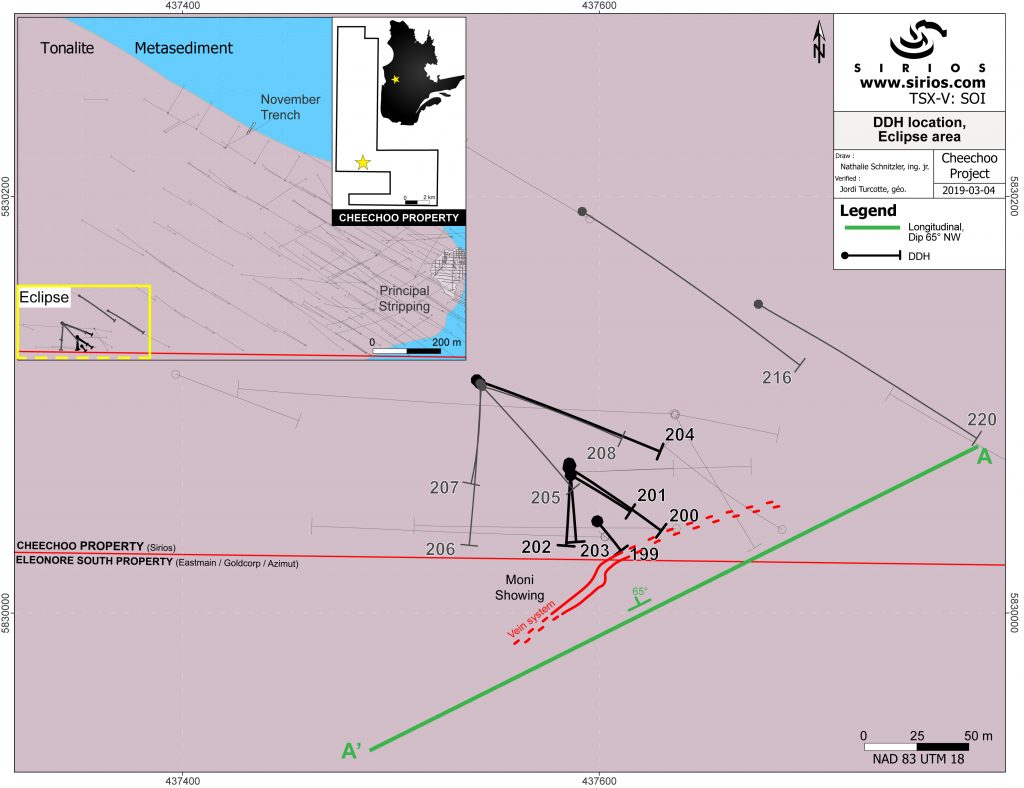 The Eclipse gold zone is located at approximately 750 metres west to the main area. It is interpreted as being the depth extension of the high-grade vein systems of the Moni surface showing, located on the neighbouring Eleonore South property (ref. October 17, 2017 Eastmain Res. Press Release), only a few metres from the common border of both properties. The zone is characterized by the presence of disseminated coarse free gold in a variable network of pegmatite dikes and veins ranging from quartz-feldspar with the characteristic ‘giraffe’ texture to stockwork veinlets composed of gray quartz.

Dominique Doucet, President, states: “We are proud of the work accomplished by our team, who with the interpretation of the geological data, demonstrated the continuity of the high-grade gold veins systems. The near-surface gold-rich veins such as the Eclipse zone represent an important asset for our Cheechoo project. These veins could provide a greater flexibility to future mining development.”

The Cheechoo Winter 2019 drilling campaign is continuing with three drill rigs active. Currently, 31 drill holes have been completed, for a total of approximately 6,550 metres. More than 10,000 metres of drilling are expected to be completed in the current campaign. This will include more than 40 drill holes to test the Main, North Contact, Mafic Dyke, Echo and Eclipse areas (ref. January 29, 2019 Press Release).

Sirios’100% owned Cheechoo property is located in the Eeyou Istchee James Bay region of Quebec, approximately 800 km north of Montreal, 200 km east of Wemindji and less than 10 km from Goldcorp’s Éléonore gold mine.

All NQ drill core are logged by Sirios personnel at the Cheechoo exploration camp. The drill core is then sent to Rouyn-Noranda to be sawed in half, with one half sent to a commercial laboratory for assaying and other half kept for future reference. A strict QA/QC program is in place by integrating blanks and certified reference standards to the core sample sequence. The samples are assayed for gold by fire assay with an atomic absorption finish by ALS in Val-d’Or. Samples assaying greater than 2 g/t Au as well as drill core samples with visible gold are assayed by fire assay with metallic sieve on a 1 kg sample.