In addition, drill hole #65 intersected, in meta-sedimentary rocks, at a vertical depth of approximately 90 metres, a quartz vein yielding 30.9 g/t Au over 1.9 metres. This vein had been intersected in drill hole #52 with a grade of 16.1 g/t Au over 1 metre at 30 metres below surface. 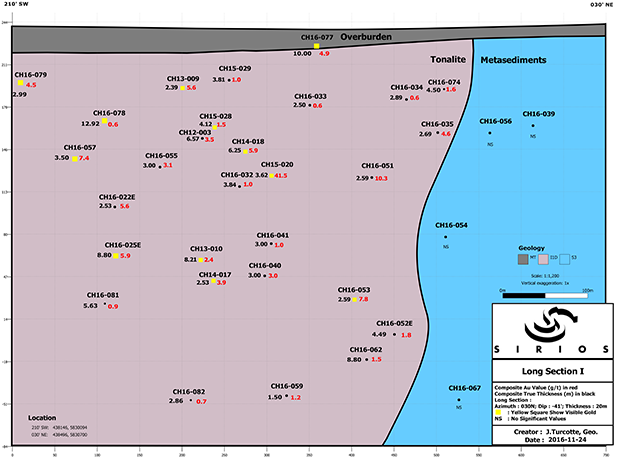 Results of recent drill holes continue to define and increase the extent of the auriferous halo which consists of large zones of low grade in tonalite, as indicated by most of drill holes from previous campaigns. A global average of 0.6 g/t Au over 187 metres has been calculated from weighted averages of gold grades and widths of drill holes #52E, 60, 61, 62, 72, 76, 77, 78, 81,82 and 83.

The drilling campaign is still ongoing and nine new drill holes (#84 to 92) were drilled as of today totaling 2,080 metres. Processing of core samples is underway. Maps showing drill holes location are available below. 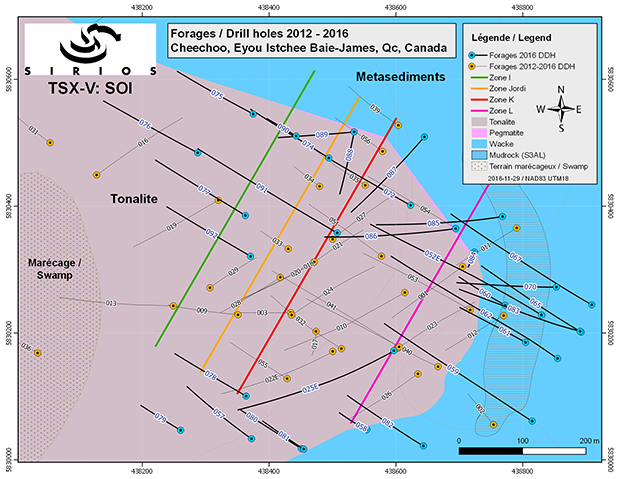 Visible gold indicating the presence of coarse-free gold, is frequently observed and one of the features of the auriferous mineralization at Cheechoo. This feature implies that the project possesses intrinsically a strong ”nugget effect” that is demonstrated by a variability in the measure of gold grades. It is reflected in the results table below that includes some samples of low grade values containing visible gold. Frequent re-assays are required causing thus longer delays before release of results. From a metallurgical point of view, this feature is encouraging, suggesting a high gravity gold recovery which was confirmed by preliminary tests undertaken in 2015 (reference press release March 24, 2015).

The Cheechoo gold project, owned 100% by Sirios, is located in Eeyou Istchee James Bay, Quebec, 800 km north of Montreal, at 200 km east of Wemindji and less than 10 km from the Eleonore gold mine of producer Goldcorp.

All NQ drill cores were described by personnel of Sirios at the Cheechoo exploration camp. They were then sent to Rouyn-Noranda to be sawed in half, with one half sent to a commercial laboratory for analysis and other half retained for future reference. A strict QA/QC program was followed by integrating blanks and standards to core samples, all of which were prepared by Services Technominex Inc. Of Rouyn-Noranda. They were then assayed for gold by fire assay and atomic absorption finish by Actlabs in St-Germain-Boulé, close to Rouyn-Noranda. Samples grading more than 3 g/t Au were re-assayed. Core samples with visible gold were assayed by pyro-analysis with metallic sieve from a sample of about 1 kg.