MONTREAL, QUEBEC–(Marketwired – Aug. 23, 2016) – Management of SIRIOS (TSX VENTURE:SOI) is pleased to announce the signing of a binding letter of intent to form a 50-50% joint venture with Sphinx Resources Ltd. (« Sphinx ») to explore 551 claims currently pending in the names of Sirios and Sphinx. This new project is located along the north-west extension of the Cheechoo-Éléonore trend in the region of Eeyou Istchee James Bay, Quebec.

Sirios and Sphinx agreed to undertake at least $500,000 each in exploration expenditures over the next five years and to form a management committee with Sirios being the operator of the project. A net smelter return royalty («NSR») of 2% is automatically provided in case of dilution of a party to a level of 10%, half of this royalty can be repurchased by the other party for one million dollars.

A map showing the location of the Cheechoo-Éléonore Trend property is available below: 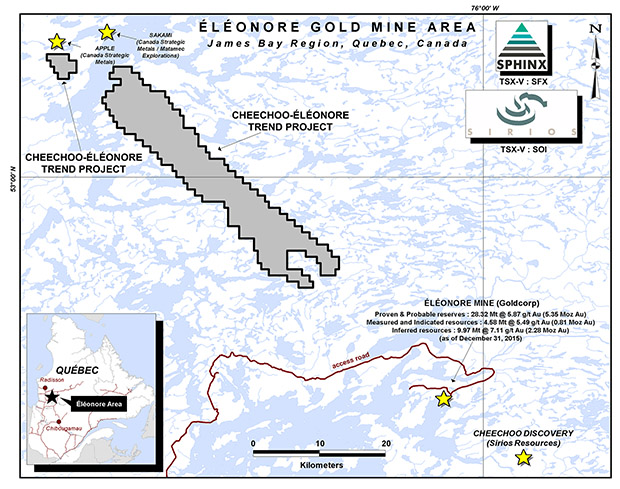 Sirios and Sphinx recognize a favorable geological context for a gold deposit discovery on the new Cheechoo-Éléonore Trend property. It is located in the extension of the south-east north-west axis formed by the Cheechoo discovery of Sirios (press release March 29, June 8 and August 10, 2016) and the Éléonore mine, a world-class gold operation belonging to Goldcorp Inc. The project’s southeastern extremity is situated approximately 24 km northwest to the Éléonore mine with a road accessible within 14 km of this location.

Technical data that are presented in this press release were approved by Dominique Doucet, P. Eng., President of Sirios, Qualified Person pursuant to National Instrument 43-101.

Sphinx is engaged in the generation and acquisition of exploration projects in Québec and Canada which is recognized as an attractive mining jurisdiction worldwide.

Sirios’s goal is to discover world-class gold deposits in the Eeyou Istchee James Bay region of Quebec in eastern Canada.